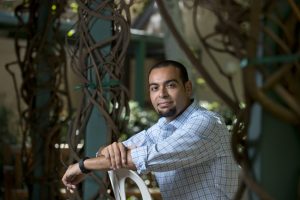 Irvine, Calif., July 19, 2016 – People who selectively recalled positive informaiton over neutral and negative information performed worse on memory tests conducted by University of California, Irvine neurobiologists, who sait the results suggest that this discriminating remembrance may be a marker for early stages of memory loss in the elderly.

For a study appearing in the August edition of Learning & Memory, Michael Yassa, associate professor of Neurobiology & Behavior and neurology, and colleagues designed and employed a test that uses participants’ recall of stories with differing emotional content to identify memory deficits and decline, particularly in the context of aging and Alzheimer’s disease.

Thirty-two older adults (21 females and 11 males with a mean age of 74.8) took part in the study. After each story was read aloud, they were asked to recite all the details they could remember. The task was repeated after 20 minutes and one week later. This allowed the neurobiologists to observe how story recall varied as time passed.

The study team included Stephanie Leal, who recently earned a doctorate at UCI, and Jessica Noche, a clinical research specialist in the Yassa lab.

“We were interested in seeing how emotional memory changes over time, so we developed a test to detect the subtle changes that occur with different types of emotional memory in older adults,” Noche said. “We specifically compared responses to positive, negative and neutral stories to learn whether emotional valence had a role in the way stories were remembered over time.”

Study subjects also took a verbal learning exam to gauge general memory performance. This served to distinguish between individuals who were high performers and those who were low performers (i.e., showing subtle memory deficits). Importantly, none of them suffered from overt memory problems severe enough for a clinical diagnosis.

Analyzing the results, researchers found that low-performing older adults exhibited a large “positivity effect,” or propensity to remember positive information. However, this came at the expense of retaining neutral material. On the other hand, high-performing older adults could recall more from neutral stories at the expense of retaining positive details.

“We suggest that this bias toward positive retention may be a compensatory mechanism that masks the effects of memory loss in the elderly, although this remains speculative,” Yassa said. “It’s possible that selectively remembering positive information may be related to changes in the brain networks supporting memory, emotional valence and reward value. Future studies using brain imaging techniques will be essential in understanding the mechanisms underlying this effect.”

Since all study participants at the time of testing had no memory complaints, researchers believe that the exam they created, called the Emotional Logical Memory Test, may tap into subtle changes in emotional memory abilities prior to obvious symptoms of cognitive decline. Further work will be necessary to establish whether subjects expressing the positivity effect are more likely to develop Alzheimer’s disease. If so, the test could prove to be a valuable tool in the early detection of Alzheimer’s susceptibility.

Elizabeth Murray, a research specialist in Yassa’s lab at UCI, also contributed to the study, which received support from the National Institutes of Health (grants R01 MH102392, R21 AG049220 and P50 AG 16573). UCI’s Center for the Neurobiology of Learning & Memory and the Institute for Memory Impairments & Neurological Disorders also provided support.

About the University of California, Irvine: Founded in 1965, UCI is the youngest member of the prestigious Association of American Universities. The campus has produced three Nobel laureates and is known for its academic achievement, premier research, innovation and anteater mascot. Led by Chancellor Howard Gillman, UCI has more than 30,000 students and offers 192 degree programs. It’s located in one of the world’s safest and most economically vibrant communities and is Orange County’s second-largest employer, contributing $5 billion annually to the local economy. For more on UCI, visit www.uci.edu.

Media access: Radio programs/stations may, for a fee, use an on-campus ISDN line to interview UCI faculty and experts, subject to availability and university approval. For more UCI news, visit news.uci.edu. Additional resources for journalists may be found at communications.uci.edu/for-journalists.